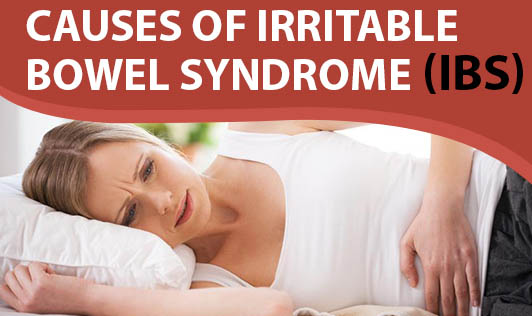 The exact cause of irritable bowel syndrome (IBS) is unknown, but most experts think that it's related to problems with digestion and increased sensitivity of the gut.

Many causes have been suggested – including inflammation, infections and certain diets – but none have been proven to directly lead to IBS. Commonly, people with irritable bowel syndrome (IBS) experience stomach cramps, gas, bloating, and changes in bowel habits.

The walls of the intestines are lined with layers of muscle that contract and relax in a coordinated rhythm as they move food from your stomach through your intestinal tract to your rectum. If you have irritable bowel syndrome, the contractions may be stronger and last longer than normal, causing gas, bloating and diarrhea. Or the opposite may occur, with weak intestinal contractions slowing food passage and leading to hard, dry stools.

Abnormalities in your gastrointestinal nervous system also may play a role, causing you to experience greater than normal discomfort when your abdomen stretches from gas or stool. Poorly coordinated signals between the brain and the intestines can make your body overreact to the changes that normally occur in the digestive process. This overreaction can cause pain, diarrhea or constipation.

Triggers vary from person to person

Stimuli that don't bother other people can trigger symptoms in people with IBS — but not all people with the condition react to the same stimuli. Common triggers include:

Foods: The role of food allergy or intolerance in irritable bowel syndrome is not yet clearly understood, but many people have more severe symptoms when they eat certain things. A wide range of foods has been implicated — chocolate, spices, fats, fruits, beans, cabbage, cauliflower, broccoli, milk, carbonated beverages and alcohol to name a few.

Stress: Most people with IBS find that their signs and symptoms are worse or more frequent during periods of increased stress, such as finals week or the first weeks on a new job. But while stress may aggravate symptoms, it doesn't cause them.

Hormones:  Because women are twice as likely to have IBS, researchers believe that hormonal changes play a role in this condition. Many women find that signs and symptoms are worse during or around their menstrual periods.

Increased gut sensitivity: Many sensations in the body come from your digestive system. For example, nerves in your digestive system relay signals to your brain to let you know if you are hungry or full, or if you need to go to the toilet.Some experts think that people with IBS may be oversensitive to the digestive nerve signals. This means mild indigestion that is barely noticeable in most people becomes distressing abdominal (stomach) pain in those with IBS.

Other illnesses:  Sometimes another illness, such as an acute episode of infectious diarrhea (gastroenteritis) or too many bacteria in the intestines (bacterial overgrowth), can trigger IBS.