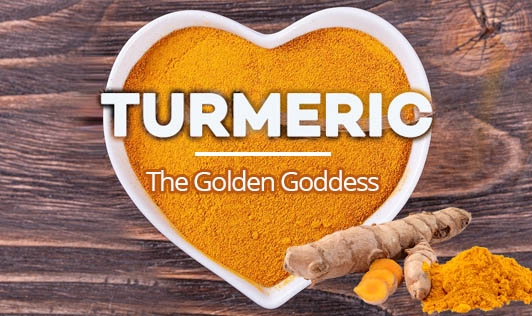 It can also be used as a mosquito repellent, wound healer, and immediate cure for scorpion stings. Turmeric helps balance the female reproductive and lactation systems, and in men, it purifies and improves the health of semen. It is used to treat external ulcers that would not respond to other treatments.

Due to its vast array of medicinal purposes and versatility, turmeric is one of the most important herbs in any natural medicine cabinet.

In Ayurveda, turmeric is believed to balance the three doshas (vata, pitta, and kapha). It has been used by Ayurvedic healers as medicine taken internally in the form of fresh juice, boiled tea, tinctures, or powder, and topically as creams, lotions, pastes, and ointments.

There are many ancient Ayurvedic formulas utilizing turmeric.

1. Milk boiled with turmeric and sugar was a popular cold remedy and turmeric juice was used to help heal wounds, bruises, and leech bites.

2. A paste made from turmeric, lime, and salt was commonly applied to sprains and inflamed joints.

3. Smoke made by sprinkling turmeric over burnt charcoal was used to relieve scorpion stings within a few minutes that the affected area is exposed to smoke.

4. Inhaling the fumes of burning turmeric was also used commonly to release copious amounts of mucus and provide instant relief from congestion. The fumes were believed to help stop hysteric fits.

5. A pinch of turmeric was also used as an insect repellent in the kitchen.

6. A paste made of turmeric alone or with neem leaves was used for ringworm, itching, eczema, and any other parasitic skin condition.

Turmeric has hundreds of molecular constituents, each with a variety of biological activities. There are at least 20 molecules that are antibiotic, 14 that are known cancer-preventing agents, 12 that are anti-tumor agents, 12 anti-inflammatory, and at least 10 different antioxidants. Curcumin is the substance that is responsible for the biological activity of turmeric. Combined with black pepper, curcumin becomes 2000 times more potent.

Turmeric is considered to fight Cancer in three ways:

The ability of curcumin to inhibit the enzyme Topoisomerase, which is required for the replication of cancer cells is the basis of most scientific research.

Turmeric also has a special action to help the entire gastrointestinal system by increasing intestinal flora and generate healthy digestion. It is traditionally used for weak stomachs, poor digestion, dyspepsia, parasites, abdominal cramps, to normalize metabolism, to help digest protein and breakdown of fats, to increase absorption, and improve the ability of the stomach to withstand digestive acids.

Turmeric can obviously stand the test of time. It has been worshipped, reveled, and revered by people for centuries, and still is one of the most significant players in the prevention of serious disease as well as the general afflictions of living. More research is underway to prove scientifically what the ancient people of India have known for centuries- that turmeric is one of the most powerful plants on the planet.