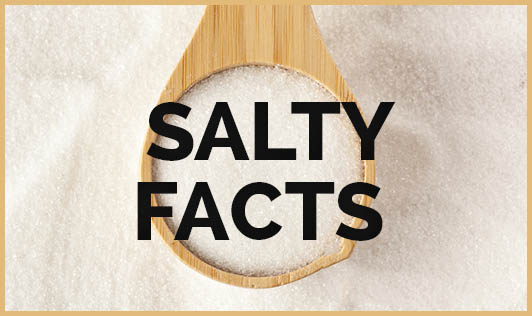 Sodium is a naturally occurring mineral element which is used as a major ingredient worldwide. Much of the sodium we use is in the form of sodium chloride, which is better known as common table salt. Salt was probably the first food additive and seasoning agent used by man for taste and also flavors. Today, it is one of the most widely used additives and is second only to sugar in the amount added to food.

The amount of sodium a person needs varies. Under normal conditions, a person may need as little as 500 milligrams of sodium or the amount of sodium in ¼ tsp of salt. In conditions such as excessive sweating, diarrhea and vomiting, sodium is lost, so the need for the mineral is greater. Any increased need for sodium can easily be met by diet alone since sodium content of the average diet is already greater than the amount normally required for maintenance.

• Table salt and other seasoning: Sodium is often added to foods during preparation in the form of table salt, monosodium glutamate, sea salt, kala namak, rock salt etc. One level teaspoon of salt contains about 200mg of sodium.

• Medicines: Some over-the-counter drugs and medications contain sodium. Experts believe that, though cutting down on salt may not prevent high blood pressure; it may lower blood pressure for people who are considered to be "salt sensitive". Often a low salt diet, combined with weight loss, medication or some other course of action, controls high blood pressure effectively.

Salt is tasty and an important ingredient in our daily cooking. Use them in limited quantity to stay healthy.